One of the more common repairs we make to Subaru’s are CV (Constant Velocity) boots.   Pictured below is a CV or Drive axle on a Subaru.  Subaru actually calls the inner joint and boots DOJ (Dual Offset Joint) and the outer joints and boots CV.  The typical industry term is inner and outer CV boots and joints and CV axle.  A CV axle being a complete assembly consisting of the inner and outer joints and connecting shaft.  There is one CV axle per drive wheel.  On a modern Subaru there are 4 CV or drive axles.   For the purpose of this article I am going to refer to everything as CV. 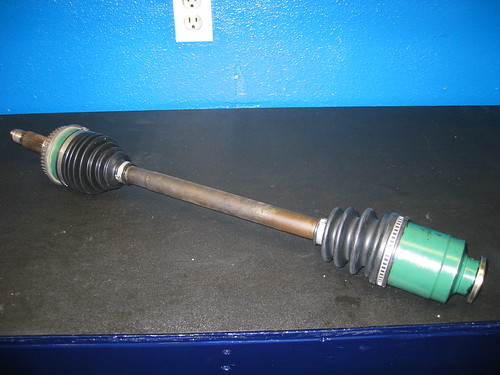 Whichever name they go by, the joint’s job is basically to allow flex or movement out of the drive axle and pretty much every front wheel drive or in the case of your Subaru, All Wheel Drive utilizes this design.   The job of the CV boot is to keep the lubricating grease inside the joints and the environment out of the joints as well. 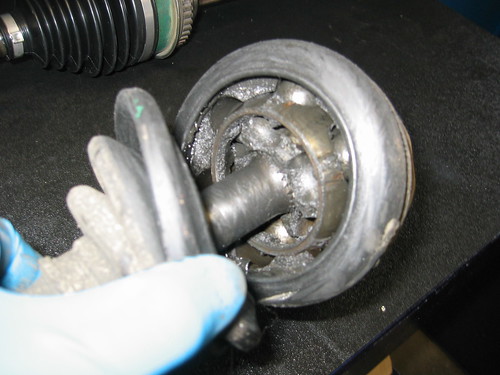 The boots are made out of rubber and do not last forever just like belts and hoses wear out, crack or become weak with age and time so do the axle boots.  The right side CV boot on the front of most non turbo 4 cylinder models is the most prone to failure as it sits very close to the exhaust and heat plays a part in the failure.   Typically when this boot fails grease is sprayed onto the exhaust and causes a very strong smell.    There are many different ways in which a CV boot can fail from clamp failure a full rip or tear of the boot.   The single best way to approach this repair is to re boot the existing O.E. Subaru axle prior to the CV joint failing.  Repairing the boot failure prior to the joint running out of grease, or dirt and grit entering the joint will allow a more economical and a better, longer lasting repair than what I am about to talk about next.

A very typical thing we see is a tire or general repair shop taking out an axle for a CV boot failure and installing a “Brand New made in China” axle.  This can start a lot of trouble in many cases.  The quality of the CV axles made in China is very suspect to say the least.     We have seen everything from vibrations at idle and very pronounced vibrations under load to boots that last just a year before they tear open again as compared to the original boots that lasted 5 to 6 years on average.     Now as the suspension ages the boots may not last as long as the first set of boots but a boot that won’t make it a year without issue is really low quality.   Vibration problems can be a biggie with aftermarket axles as well this can be under acceleration, turning or even just at idle.   Excessive play in the inner joint allows the inner portion of the joint to move back and forwards within the inner joint housing is typically the cause of this.

Next is the one size fits all axle we see so often, with the incorrect inner sealing ring installed.   We have seen this cause premature failure of wheel bearings by not providing the proper seal where the CV axle fits into the wheel bearing, seals and hub.    Aftermarket parts vendors try to keep costs down by eliminating part numbers and providing one axle that can be used in both ABS(Anti Lock Brake System) and Non ABS both.  The difference being the Toner ring installed on the axle outer CV joint.  The toner ring spins with the axle; a sensor interprets this as a speed and inputs information back to the ABS module.  By coming up with an axle that can physically be installed in either application the Aftermarket parts maker has reduced its inventory and production costs, good for their business but not so good for your Subaru.  A large supplier of axles has also decided that because the older 2 wheel drive axle used by Subaru many years ago which was larger in size and believed to be stronger, has decided for you that your newer Subaru should have a 2 Wheel drive axle installed regardless of the fact that this puts the inner cv boot much closer to the exhaust and it will fail very quickly the 2 wheel drive axle in the earlier years was larger in diameter than the AWD axles.

Remanufactured axles have mostly gone away, Subaru has had a here now gone tomorrow Remanufactured axle program that has had some quality control issues as well and they are a bit pricey.  A new axle from Subaru is typically over $500.00 and not always available.  There used to be better solutions but the flood of cheap priced aftermarket parts brought down the price to repair but really brought down the quality of the repair with it.

It is much easier to just swap out axles and there are plenty of shops that employ Tech’s that may be scared of taking apart the axle or may not have the right tools to do the job.  Or a shop may look at the potential profit of installing a low cost axle and not care that much about how long the repair lasts.  Another real possibility is just plain lack of understanding.  The O.E. Subaru axle that came in the car when it was new is much superior in quality to anything that can be purchased in the aftermarket and much better than a Subaru Remanufactured axle as well.  Catching the boot failure early when the boot is starting to crack will keep the costs down and yield a much better repair.

This is another reason to not take your Subaru to a quick lube center for an oil change, while they  will always catch a dirty air filter and suggets a transmission flush,  but since they can’t repair cv boots, they won’t know what to look for, if they look at all.

Below are some pictures of some axles. 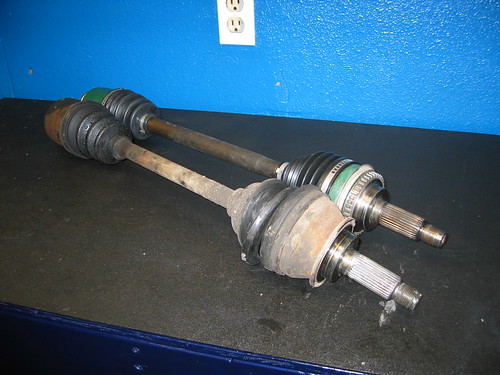 This is an AWD axle next to a 2WD axle, you can see the difference in size. 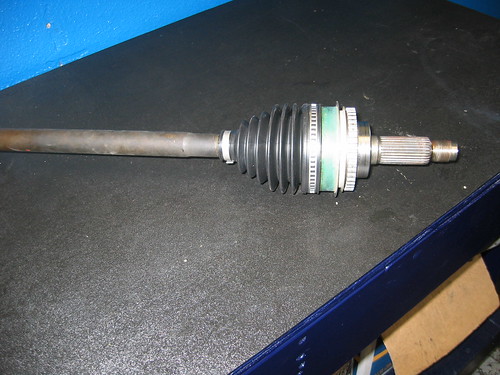 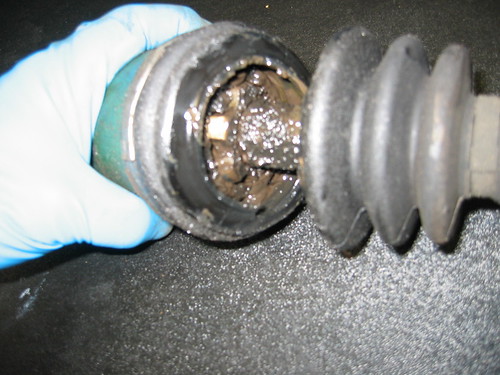 A torn open inner boot and a joint that has grit and grime inside of it now. 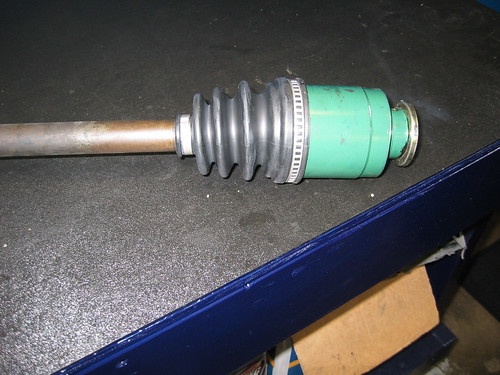 New Cv boot installed on the inner joint of an O.E. Subaru axle