If the check engine light comes on in your Subaru there is always a corresponding code set in the computers memory.

You can read about how the system works here.

One of the more common codes we see on the Subaru, is P0420 Catalytic Converter Efficiency Below Threshold.  I am taking a more technical approach than normal to describing what happens when the code is set, as it is a very technical process that needs to occur to get real results, we don’t always replace converters, sometimes its just a small exhaust leak, or a failed sensor of in some cases a faulty fuel pressure regulator.  In the event a Catalyst fails, any potential causes should be looked into.

This will hold true in most all of these Subaru models:

Its the single most ignored code, and one the the most challenging to accurately diagnose.  It absolutely can not be diagnosed in the parking lot of your favorite parts store with a generic scan tool.

Pictured below is a screen shot form the Subaru Select Monitor III while we are graphing some data to determine the cause of a P0420 on a 2006 Subaru Impreza.  I have outlined the rear 02 sensor in yellow, the pattern we are seeing indicates either the Catalyst is not reaching the point of “light off” or “function” or the rear 02 sensor is sending incorrect data to the ECM (Engine Control Module) .  What must be done next is to determine the correct answer to that question, by testing the rear o2 sensor and by performing a catalytic converter efficiency test and evaluating fuel trim. 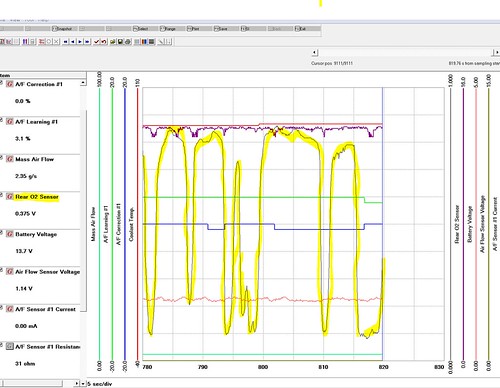 Pictured below is what the rear 02 sensor readings will look like once the Catalytic converter reaches the point of light off.  You can clearly see the differences in the two high lighted readings, I have also made some changes in the time and division portion of the Graph to help better show the data in question. 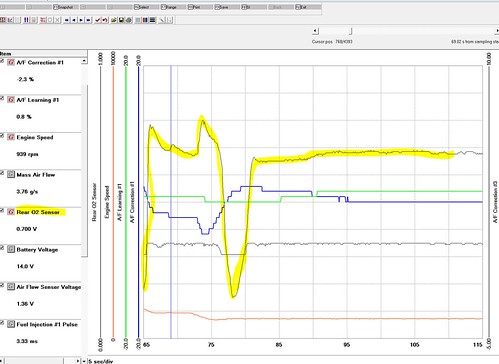 Why the data above is important;

So at this point all that has been learned is that the ECM is correct and there is a function issue, but until more testing is done we don’t know the why.

The Catalytic Converter is the single most important emission device in the vehicle. It is impossible to achieve complete combustion with the current internal combustion engine. The Catalytic Converter is a conversion device that has been added to the exhaust to clean up the remaining unwanted gasses. The purpose of the catalytic converter is to reduce HC, CO and NOx. In order for the conversion to work efficiently it needs lots of oxygen. The converter is made of a honeycomb ceramic structure held in place with a Nickel support shell, all contained in a metal housing. Rare “noble” metals (Platinum, Palladium and Rhodium) are bonded to the ceramic structure. These metals give the catalytic converter a 3- way operating characteristic that can change CO, HC and N0x to inert gases like CO2.

At about 600 degrees Fahrenheit the Catalyst hits the light of point, and the following should occur .

If the Catalyst is restricted, in the way of carbon deposits, it wont reach temperature and as such wont function, it is possible in some cases to de-carbon the exhaust system, but only if that is the diagnoses.

The next part is a little less scientific and a little more in the grey area, its entirely possible for a check engine light to occur after the battery is disconnected and set a PO420 even though there were no indications of a catalyst issue prior.  The why is learned data that has been lost typically with light of parameters, coolant temperature and maybe engine repairs that make changes in Combustion temperature   such as replacing leaking head gaskets.  But I will save that for another article.

The point I am trying to drive home is its not simple, its not possible to diagnose without testing, its instead at that point called “guessing”.  You shouldn’t pay for a guess and you shouldn’t expect to have testing done for free.  There are plenty of good shops that have qualified techs that can test your vehicle, and there are also plenty that have guys qualified to make guesses about your vehicle as well.

Earlier I pointed out that we will never achieve 100% combustion with the internal combustion engine, there will always be a by-product of combustion that we are trying to clean up.  Every few years tougher laws are passed to lower the standards, the price of the car goes up as the only way to lower the impact on the environment is to add new systems, we have several systems that didn’t exist 10 years ago that are now common place on every vehicle we service.