So, your Subaru is due for its timing belt repair / replacement.  Your owner’s manual states replace the timing belt at 105k for most models produced after 1996.   Most will call around looking for the best price and not having any idea it’s really not the same as shopping for a TV or a mattress.

One shops timing belt replacement may differ greatly from the next and there is a right way and a cheap way.

Ask questions beyond just the price, what does the service include, what kind of parts are being used?  There is a difference and in the case of auto repair the difference usually shows up after the warranty on the repair is over.  Understanding the repair should last fairly close to the amount of time the original part lasted is just as important as understanding the lower priced service may represent a lower value obtained.

The timing belt has a big job to do it must keep the camshafts spinning in time with the crank shaft.  This is so the valves open up at the proper time in the combustion cycle in correlation with air and fuel coming in, compression and spark exploding the mixture and the exhaust valves opening up to release the leftovers.  At the same time the timing belt needs to turn the water pump and be able to self-adjust in current models.  Over time the rubber stretches out above the tensioner’s ability to keep it tight under all load conditions and just like your tires the rubber belt will age, wear and crack and ultimately could break.

A worn or stretched timing belt can cause performance issues as well as increased fuel consumption, not in miles per gallon but in miles per tank.

Every vehicle manufacturer provides a warranty so long as the maintenance is done, every car company also has a breakdown of vehicle maintenance such as 30/60/90k service with a clear break down of what should be inspected and replaced at particular service intervals.  But what is not understood is it does not look good to list a lot of items to be replaced.  Meaning if you are Subaru or any other car company it doesn’t pay to be truly honest of all of the potential service needs because your car will be perceived to cost more to own than the next and a lot of people make buying decisions based on cost of ownership studies provided by JD Powers, and consumer reports to name a couple.  Subaru and every other car maker leave it up to whoever is servicing the car to inform or “sell the customer” on items not listed in the maintenance booklet.  This is nothing new to the industry but is one aspect of maintenance if not done correctly can have some serious ramifications.

There are many different levels of parts quality, some shops will gravitate to the lowest cost part and as long as its new and lasts the standard warranty period of one year that’s all that matters to them.   Next the skill level of Techs can vary greatly as well.  If you are calling around for the best price on a service, you really need to understand there may be a difference in the quality of the service your Subaru will receive having the timing belt done isn’t nearly as good as having it done completely with quality components by Technicians that really know what to look out for on your Subaru.

We approach this the right way, service your Subaru so there are no problems later by doing the job complete so there is no reason to go back in one or two years later.  We offer a lower price than the Dealer service department but, in some cases, will be priced higher than a tire store offering a timing belt replacement.  This is going to be a typical situation across the country, independent Subaru repair shops will typically be lower priced than a dealer service department but more expensive than “John Doe’s auto” and that is typically because we know the right parts to use and take pride in offering the best service possible.  John Doe may not realize the green idler pulley is going to fail, or that there is a service bulletin pertaining to the timing belt tensioner and bracket. 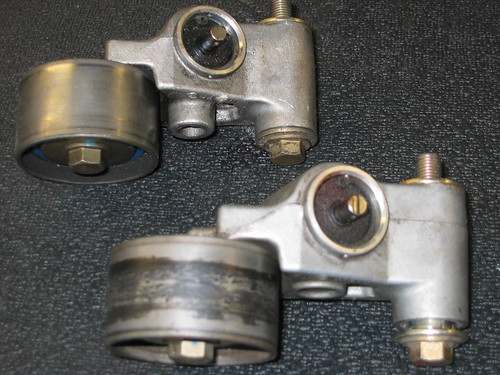 The idea of replacing the timing belt only and thinking the tensioner or idlers are going to last another 105k without any issue is a gamble.  I am not suggesting that every part needs to be done every time but in the case of the timing belt tensioner it really is a must replace in my opinion or you are just inviting a problem.

This is a picture of a first generation 2.5l that need to be inspected as part of a quality timing belt replacement procedure. 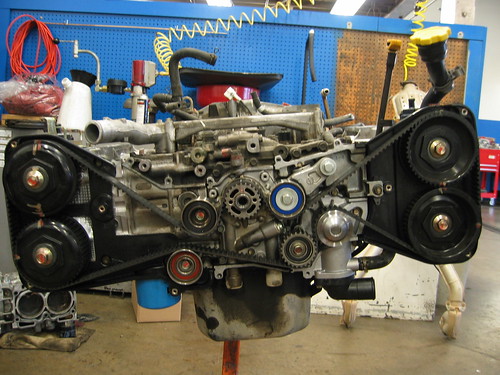 You can see that there is a lot more to a timing belt than just the belt, all of the components that are located behind the timing covers and that can affect the life of the timing belt all need to be inspected.  Notice the way the timing belt is putting pressure on the water pump (the part with the hose attached on the right) 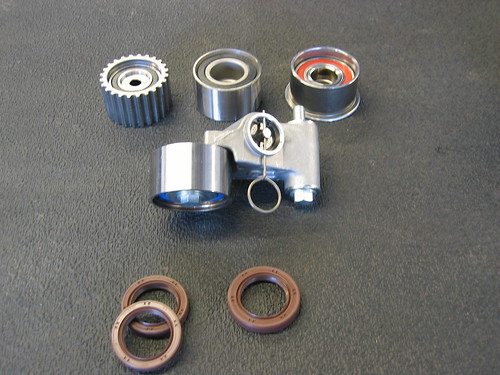 These are the components of a second Generation 2.5l the idler on the right has been superseded to the one in the middle but can still be used.

Next is a picture showing the difference between the O.E. Timing belt idler and one made by an aftermarket parts company.  The original part used and the one superseded by Subaru call for a double bearing type idler and this one shown in the picture is a far cry from a part that “meets or exceeds” original parts manufacture. 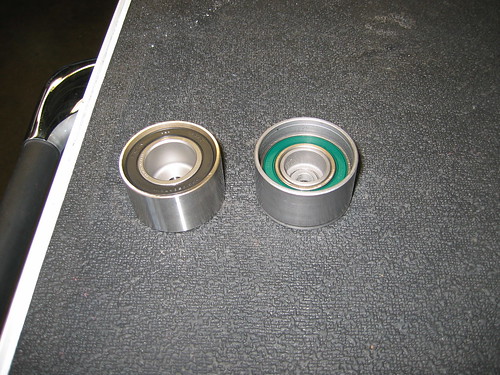 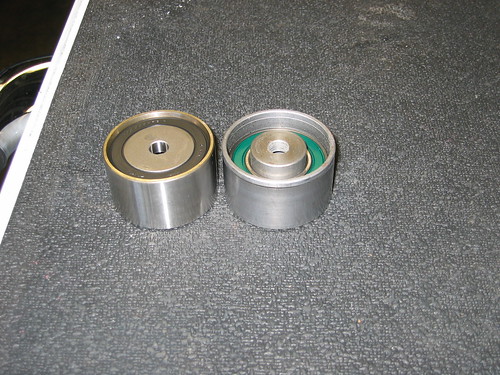 No matter how you look at it, the parts in the two pictures above are not of the same quality and if you aren’t careful you could end up with the green one and worse for the same price as the one next to it.  If it lasts the warranty period but not much longer it will cost more to correct it a second time.

There is no need to sacrifice quality when saving money.  A good independent Subaru repair shop can save you money over a higher priced dealer service department and do much more for less.   That is what we offer at All Wheel Drive Auto, complete repairs you can rely on.