Some answers to the Subaru head gasket problem.

At our Subaru shop we see a fair amount of Subaru’s with failed head gaskets. There are two separate groups or years of production that the failures fall into. The following information is aimed at educating our customers about the problems, what to look for, tips on how to avoid future problems, and what to if your Subaru has developed problems with the head gaskets.

The first group is the 1st generation 2.5l engine found predominantly in the 1996 to 1999 Outback, Legacy G.T., Forrester (up to mid-year 1998) and Subaru Impreza R.S. This group usually, will develop an internal head gasket leak ultimately resulting with an overheating engine.

Early signs of head gasket failure in the 1st generation Subaru 2.5l engine will include an oily residue found in the coolant overflow bottle also possible is an exhaust, fuel or sulfur smell in the coolant overflow bottle. From there what typically happens next is intermittent higher than normal coolant temperature gauge readings, followed with intermittent overheating especially during a long freeway trip or a drive up the mountain passes.

The second group is the 2nd generation Subaru 2.2l and 2.5l engines found in the Forrester from mid-year 1998, Impreza from mid-year 1998, the Outback and Legacy from 2000.The early symptoms that occur in the 2nd generation engines is usually an external oil leak at both head gaskets and an external coolant leak at the left side head gasket, we have seen coolant leaks at the right side head gasket as well but at a much lower failure rate than the left side. We have seen some of the same intermittent overheating symptoms, but the bulk of the issues seem to be external leaks.

Early detection of failing head gaskets is the key to keeping the repair costs down.

Typically speaking when the problem is diagnosed and repaired at the earliest signs of failure the potential for additional damage can be held to a minimum.

The problems are fairly well known, and the internet is a great tool for information. Unfortunately, a lot of automotive professionals do not truly understand the potential causes of the failure. If the problem isn’t properly understood, then some of the advice as to how to avoid the potential failure or reasons as to why this happened may be incomplete. This is where All Wheel Drive Auto can serve you better.

We have yet to see a repaired and properly maintained vehicle have the same problem twice. And we feel that when the repair is done completely, it is a bump on the road to 300,000 miles.

Here is some of the technical information related to the gaskets used.

In 1996 on the 2.5l engine Subaru used a composite type head gasket similar in construction to the head gaskets found in the Subaru Legacy & Impreza 2.2l engine. Starting in 1997 and used through 1999 Subaru began to use a multi-layer steel shim head gasket with a graphite type outer film. And this is where the problem has started.

In mid-year 1998 Subaru redesigned the 2.2l and 2.5l, most of the changes were in the cylinder heads and camshaft configurations. This design has had mostly problems with external head gasket leaks. Both oil and coolant

Tips on how to avoid or decrease the chance of failure are as follows.

1. Change the engine oil on a regular basis. As part of the normal combustion process not all of the fuel that enters the combustion chamber (this is where the compressed air fuel mixture is met with spark from the spark plug causing an explosion and creating power) is burnt, unfortunately we don’t drive vehicles that achieve 100% combustion. The unburnt fuel is scraped past the rings into the crankcase where it is mixed with the engine oil. The longer the oil is in the engine the more diluted the oil becomes with fuel. Fuel is a solvent that can eat away at seals and gaskets.

What is supposed to happen is that as the engine oil gets up to temperature the fuel will evaporate through the crankcase ventilation system into the intake manifold where it will mix with the air coming into the combustion chamber and be burnt there. But in areas such as the Puget Sound we do a lot of idling in traffic, and short trips where the oil never gets the chance to get up to the temperature needed to achieve the designed process. This is where understanding the difference between normal and severe use is crucial in car maintenance.  Maintain your car based on how you use it, Consumer reports and JD Powers, put out ownership cost studies and as a result car manufactures don’t want their car to seem like it costs more to own than the next one, think of the maintenance outline as the minimum amount of maintenance you should do.

2. Don’t let your Subaru’s battery become a hazardous waste area. We see a lot of Subaru’s come into the shop with “chia pets of corrosion” on the top of the battery. To the point where the battery is no longer visible from the top and the cable set has been damaged. Batteries typically go three to five years before they will really start to vent out a significant amount of acid. Under normal circumstances the battery is used to start the vehicle and to power accessories when the engine is not running. Any time the battery is used it loses some of its charge.

Most Subaru owners drive their vehicles with all of the accessories on. Sometimes at idle the alternator can’t keep up with the entire electrical load put on it and some power is drained from the battery. The process of the battery being discharged and charged is ultimately what causes the acid to vent out of the battery. How does a battery effect head gaskets you ask? Without getting to far into the scientific end of it, the battery is located very close to the radiator.  The electrical system in the car is grounded to the engine block on the left side of the engine, as the ground circuit resistance increases (from corroded battery cables), the voltage found in the cooling system will also increase, this is what causes electrolysis.   Coolant can become very corrosive as a result.  This is nothing new to cars, but it has gone overlooked by today’s era technicians, I know that checking voltage in the cooling system is nothing that is typically done at the dealer level during a service, nor do most independent shops perform this either.  There is a good chance that most don’t even know how to check for it.

A battery that is covered in battery acid and corrosion will add to the level of corrosion in the cooling system, by increasing the resistance in the vehicle ground circuit which can lead to higher levels of electrolysis. This corrosion can eat away at metal gaskets, seals and metal that it comes in contact with. On a 2nd generation 2.2 and 2.5l it is almost always the left side head gasket that leaks coolant externally and it is also the cylinder head gasket that is the closest to the battery. Odd, no? A properly serviced and healthy battery will decrease the possibility of the battery adding to the corrosion level of the cooling system.

The health of the electrical system is a contributing factor.  We know that corrosive coolant is part of the problem, we know that electrolysis is a result of increased voltage levels in the cooling system as a result of poor grounding, we know that a poor ground can be caused by resistance in the primary electrical circuit.  We know the coolant is the same in the entire engine, and the gaskets the same left to right the only difference is the fact that the ground is at the left side of the engine and that if there is voltage present  in the cooling system it will always travel the shortest path to ground and the ground is on the same side of the engine as the gasket that always fails the most via external coolant leaks.

I don’t suggest that this is the primary factor, but one of many and the single easiest to prevent in most all cases.

Here are some examples of what not to ever let happen. 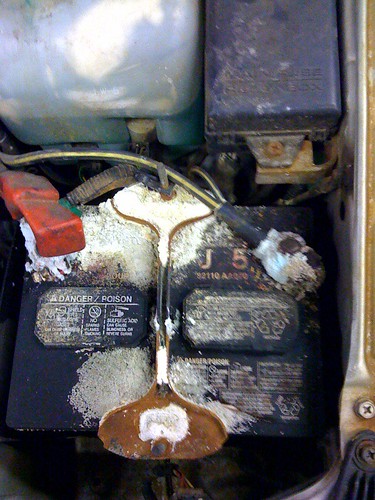 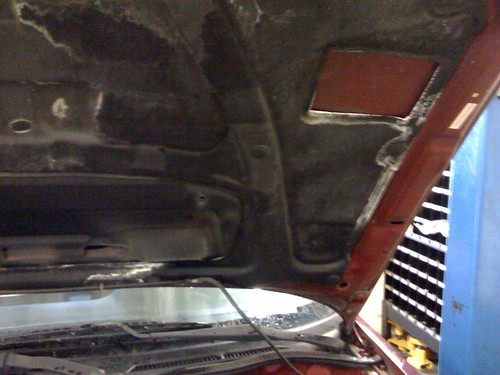 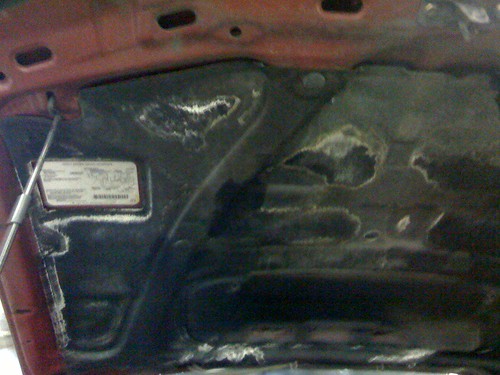 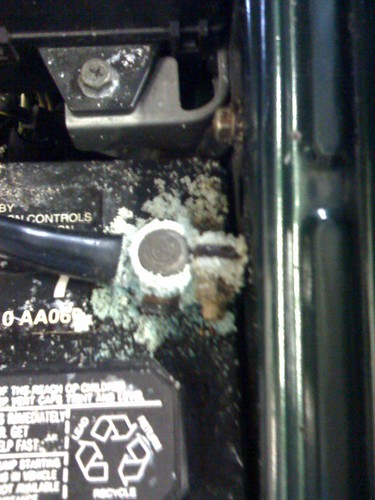 3. Change your Subaru’s coolant on a regular basis. This is one of the most important things you can do to your Subaru. As discussed previously corrosive coolant can deteriorate seals and gaskets over time. The use of the proper anti-freeze is recommended by Subaru as well as is a coolant additive on vehicles with the 2nd generation engines for a period of time.

4. Know what is being used in your Subaru. Not all auto parts, services and repairs are created equal. For example, using non O.E. (original equipment) type spark plugs can create hotter or cooler combustion temperatures. The combustion temperature has a lot to do with the amount of cylinder head, and gasket expansion. Generic coolant will save you about $5.00 over O.E. coolant but is it worth it in the long run?

5. This is a biggie, and the most overlooked. If you have a new car warranty or an aftermarket warranty policy that is about to expire, have the vehicle inspected by someone who specializes in Subaru’s like All Wheel Drive Auto. The dealer is not going to call you and schedule in your Subaru for an inspection prior to the warranty expiring.

This is where All Wheel Drive Auto can truly serve your interest’s well.

Calling the dealer empowered with information and documentation about leaks is much better than hoping you won’t have any problems.

Subaru utilizes the horizontal engine design and is one of the reasons that the all-wheel drive system found in the Subaru is superior to the other makes and models out there. The horizontal engine platform is also a large part of what makes a Subaru a great safe vehicle and the all-wheel drive and safety of a Subaru is usually what influences the decision to own one.

A Subaru can give its owner many years of trouble-free life. That added with the knowledge that it will get you to where you need to go regardless of road conditions. As such we feel that the repair done correctly, and a good maintenance schedule following will yield years of trouble-free driving. This is a failed 1st generation head gasket found in the Subaru 2.5l starting in 1997.

Notice the silver area where the black film has washed away allowing coolant and cylinder pressure to exchange. In the above picture you can see that the upper portion of the gasket is fine.   This is an example of how gravity is part of the problem, when combined with the solvent that is fuel and potentially corrosive coolant. 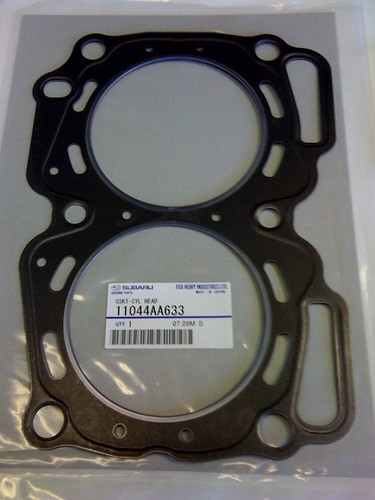 This is the updated gasket photo from Subaru for the 2nd generation 2.5l 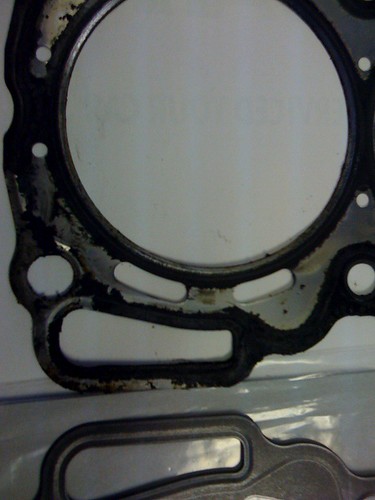 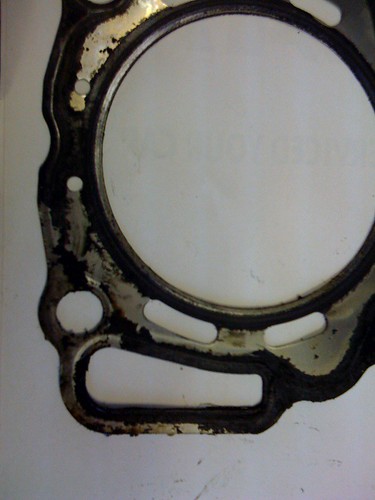 You can see how the gasket material has been eaten away, anywhere you see sliver is not good. 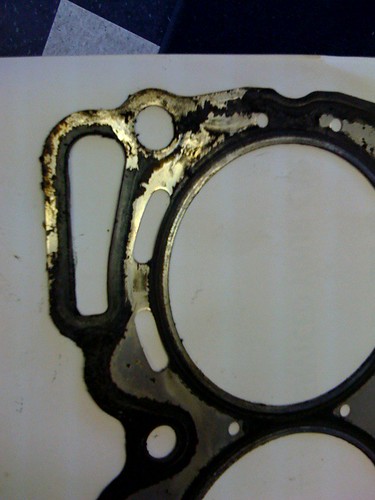 Another picture of the same issue, an eaten away gasket. 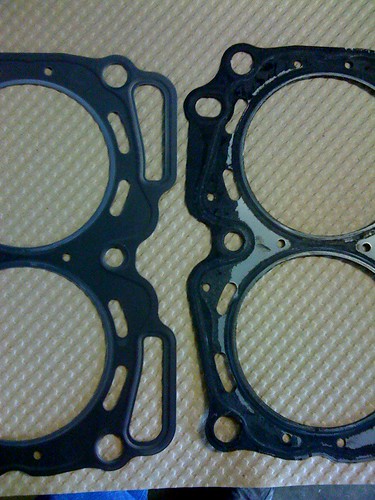 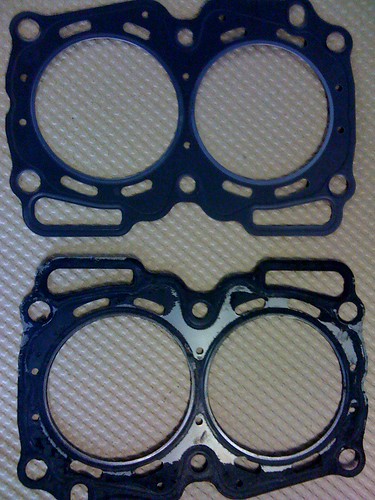 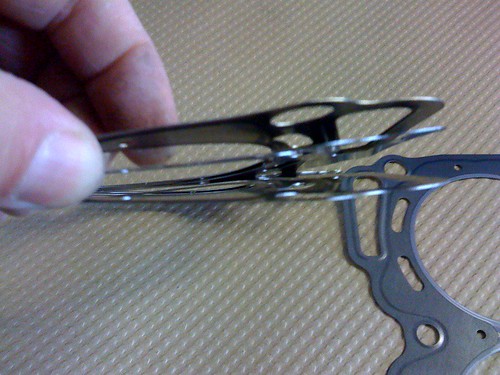